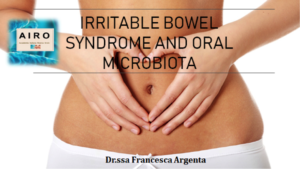 Irritable bowel syndrome (IBS) is the most commonly diagnosed functional gastrointestinal disorder characterized by chronic abdominal pain and changed bowel habits in the absence of an overtly identifiable cause.

IBS has gained significant interest in healthcare due to its high occurrence, complex pathophysiology, difficult diagnosis due to a wide range of non-specific symptoms.

IBS can present with a wide range of both gastrointestinal and extraintestinal symptoms. These include:

The prevalence ranges from 10–15% in population-based studies in North America and Europe.

The elevated chronic consumption of high-fructose corn syrup has been linked to various health problems, not only to IBS but also diabetes mellitus, non-alcoholic fatty liver disease, aging and cholesterol.

Oral microbiome, that appears to be stable within an individual over the short- (days) and long term (years), varies less within and between individuals  than the microbiome from other body regions, including the gut.

This phenomenon has been further demonstrated in an animal model of colitis. Disease associated perturbations in the oral microbiome could be significant as an indicator or diagnostic of systemic dysbiosis and/or specific pathological conditions or risks. Oral health and variation in the oral microbiome has been associated with several disease conditions, including IBS. Oral microbial perturbations and microbial variation in relations to symptom severity remain largely unexplored.

It remains unclear how the oral microbiota may affect systemic and/or non-oral biology and pathology. Oral microbes are capable of producing toxic and mutagenic metabolites (e.g., alcohol to acetaldehyde) to which the oral and gastrointestinal (GI) tract is exposed. Oral bacteria can colonize distant (GI) sites, or translocate across the epithelial barrier to colonize and infect non-oral systems or organs (e.g. joints and heart). Microbes could also directly modulate host inflammatory and cell signaling pathways as a ligand source.

We don't know yet if oral microbiological changes are caused by intestinal bacterial modification or it depends on external factors like diet modification and/or socioeconomical factors that determine a less oral hygiene. Interpretation of the oral microbiome, as with the gut microbiome, is complicated by a range of anthropogenic confounders (e.g. socio-economic and culturally mediated dietary or hygiene preferences etc.)

A growing body of research indicates that the oral cavity is a potential source of microbiome information relevant to non-oral conditions. Oral substrates may be a useful minimally invasive source of informations with diagnostic potential. The intra-oral DNA sampling is effected through Buccal swabs. DNA is extracted from Buccal cells and mucus (The microbiome of the oral mucosa in irritable bowel syndrome. Nicolaas H. Fourie et al. Gut Microbes. 2016 Jul 3;7(4):286-301)

Further research on the oral microbiota might hold potential clinical and diagnostic utility in the future (Docktor et al., 2012).