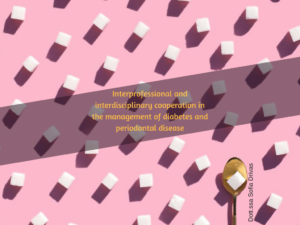 This article aims to underline the importance that preventive medicine is increasingly gaining. In the dental sector, the perio-medicine is also evolving thanks to the numerous scientific studies being carried out to assess the correlations between periodontal disease and systemic diseases. In this context, I want to talk about the new guidelines drawn up by a representative group of EFP (European Federation of Periodontology) and IDF (International Diabetes Federation) that have been published in the Journal of Clinical Periodontology: “Scientific evidence on the links between periodontal diseases and diabetes: Consensus report and guidelines of the joint workshop on periodontal diseases and diabetes by the International Diabetes Federation and the European Federation of Periodontology”. New guidelines for physicians, oral healthcare workers and patients: recommendations for the global multidisciplinary team caring for people with diabetes and periodontitis.

The data, tables and information that you will find in the article have been extrapolated from the new guidelines, recommendation of the American Diabetes Association, documento congiunto SIdP AMD SID, National Institute of Clinical Excellence United Kingdom and WHO website which you can find at the end of the article in the bibliography.

Ischaemic heart disease and stroke are the world’s biggest killers, accounting for a combined 15 million deaths in 2015.

Chronic obstructive pulmonary disease claimed 3.2 million lives in 2015, while lung cancer (along with trachea and bronchus cancers) caused 1.7 million deaths. Diabetes killed 1.6 million people in 2015, up from less than 1 million in 2000. Deaths due to dementias more than doubled between 2000 and 2015, making it the 7th leading cause of global deaths in 2015 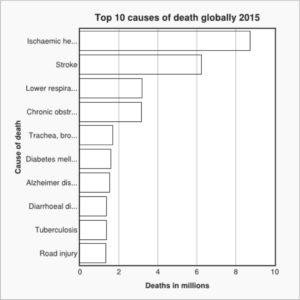 Diabetes and periodontitis are chronic non‐communicable diseases independently associated with mortality and have a bidirectional relationship. Non-communicable diseases (NCDs) are the leading cause of death (72% or 39.8 million). Cardiovascular mortality is on the rise as we have seen in the table previously.

There is a strong association between periodontitis and chronic non-communicable diseases of ageing because they share similar risk factors. 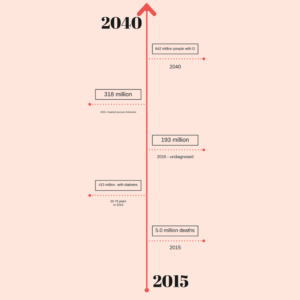 In 2015 5.0 million deaths are caused by diabetes and there are 415 million of adults from 20-79 with diabetes, 193 million undiagnosed and 318 million with impaired glucose tolerance.

It is estimated that in 2040 642 million people will live with the disease.

FROM THE RESEARCH TO CLINICAL PRACTICE

AMONG PEOPLE WITH DIABETES, IS PERIODONTITIS ASSOCIATED WITH MORE DIABETES COMPLICATIONS?

The article states that it's possible and we must manage periodontitis in people with diabetes.

KEY OF SUCCESS IN PREVENTION: INTERPROFESSIONAL AND INTERDISCIPLINARY COOPERATION

Every patient with confirmed diagnosis of diabetes should be informed of their increased risk for periodontitis.

GUIDELINES FOR ORAL HEALTH PROFESSIONALS IN THE DENTAL OFFICE

The novelty is therefore that of cooperating among various figures in the health sector for a medicine that is increasingly preventive and that puts together several professional figures.

At the end of the article the authors proposed the use in the dental office of the type 2 diabetes risk assessment form: 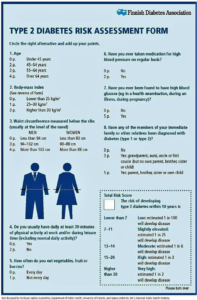 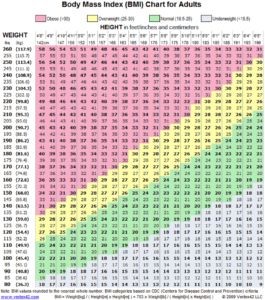 It is important to know how to carry out effective and efficient screening and what are the criteria for asking the patient to carry out more detailed analyses.

CRITERIA FOR TESTING FOR DIABETES OR PREDIABETES IN ASYMPTOMATIC ADULTS

In the absence of typical symptoms of the disease the diagnosis of diabetes should be made with the confirmation of: - fasting blood glucose ≥126 mg/dl confirmed on at least two different occasions - blood glucose ≥200 mg/dl two hours after oral glucose loading (performed with 75 g) - HbA1c ≥48 mmol/mol (6.5%) (with standardized dosage of HbA1c).

Although dentists and dental hygienists cannot diagnose diabetes, they must be able to know what the diabetes diagnosis criteria are, the tests they use and the threshold values described below.

CRITERIA FOR THE DIAGNOSIS OF DIABETES

A1C >6,5%. The test should be performed in a laboratory using a method that is NGSP certified and standardized to the DCCT assay

2 hours PG>200 mg/dL during an OGTT. The test should be performed as described by the WHO, using a glucose load containing the equivalent of 75g anhydrous glucose dissolved in water

FPG>126 mg/dL. Fasting is defined as no caloric intake for at least 8 hours

In a patient with classic symptoms of hyperglycaemia or hyperglycaemic crisis, a random plasma glucose >200mg/dL.

In America, academics and physicians are developing a new prototype on salivary analysis to assess diabetes called iQuickIt.

Diabetes is the sixth leading cause of death in the world: early screening could help patients avoid the most serious complications of diabetes and maintain their natural teeth.

What is the role of the health professional? We must do screening tests for diabetes, make a periodontal record and educate people on proper oral health manoeuvres, but our role does not end here. Oral health professionals should address with their patient all modifiable lifestyle risk factors: smoking cessation, weight reduction, proper nutrition.